The International Journal of Systems and Society has been developed from the Systemist, which was the main publication of the UK Systems Society for more than 30 years. Although since linking with IGI the IJSS reaches a much wider readership now thanks to IGI’s extensive marketing reach. Never the less it is still intended to be the core journal for the UKSS membership. To that end when changes are taking place within the UKSS the IJSS is one means of communicating important events to members. We are implementing a number of changes and we have included in this edition a report, which details the changes that are taking place. The report also summarises the first of the new ventures, the Systems Forum, that is part of our new look. This report follows the refereed publications.

As a systems community, we are aware that all closed systems tend to entropy. An open System can delay/avoid this by accepting useful inputs from its environment. If we consider the UKSS to be an open System we must continue to make changes if we are to survive. The society has existed for more than 40 years and during that time has undergone many changes in an attempt to maintain its relationship with its environment. But modern technology has introduced new challenges for us to consider. New ways of communicating is easy, ubiquitous and is the default method of communicating for many of us; there are now virtual conferences; online forums and open source portals for publications and many more ways of making connections than when the Society began. Whereas conferences and conference proceedings were a major source of ‘finding out’ about developments taking place in the respective community many of these have been replaced with various forms of digital communication. As with all areas of common interest the systems community can exchange ideas quickly and effectively through modern communications. There are many competing factors that societies have to confront. These include operating costs, the increasing cost of conference venues, the effects of funding policies in higher education and elsewhere. Like many societies such as the UKSS we have now reached the crossroads. For this reason, we have changed the way that the society operates and interacts with its membership in order to maintain our role as a source of Systems expertise and knowledge. Key changes include the following:

The International Journal of Systems and Society has been developed from the Systemist, which was the main publication of the UK Systems Society for more than 30 years. Although the IJSS reaches a much wider readership now, thanks to IGI’s extensive marketing reach, it is still the core journal for the UKSS membership. But please note that the change in membership means you should make sure to increase your DD to £70 p.a. in order to gain access to the journal or if you just wish to be on the membership database then close your DD. The treasurer has already written to members on this subject but to reiterate – “any sum below £70 will be assumed to be a donation to the society” – gratefully received – but does not entitle access to the journal.

One important point for prospective authors to note is that we are in discussions with igi about the possibility of allowing authors to pay a fee and in return publish their papers under a ‘however, . This is a scheme where the author retains all rights but grants permission to IGI Global to publish the paper in its journal. This possibility seems an attractive idea, but we are not yet in a position to say what the costs might be; members should watch the UKSS web page for news of this.

As we are implementing a number of changes to the society we have included a report of one such venture in this edition. The report of the first ‘Systems Forum’ follows the refereed papers. The report also provides some details of the changes that are taking place within the Society.

Welcome to Volume 3 July-December issue. This issue is a mixture of papers and the report on the first Systems Forum. The report takes up a significant part of this edition and because of this we, have limited the edition to three refereed papers.

The first paper is written by Shavindrie Cooray and Steven Gunning is entitled Analysing online social networks from a soft systems perspective. The authors deal with the popularity of online communities as a way for dispersed members to interact and share ideas. There has been limited research about the way in which this form of communication is being used. The authors suggest that using systems research methods will help to understand and interpret data gathered from an online group. This they suggest is by assigning meaning to it in the context of a wider ‘system’. When applied to online communities they argue that conventional methods of offline group analysis are ineffective. They offer a way of importing big data from a community using social media and identify the kinds of information that is gathered during an offline systemic analysis into a problem situation. What they offer is an aid to managers through a framework that identifies appropriate Social Network Analysis (SNA) metrics (from the imported data) that corresponds to ‘soft systems’ thinking. Their research provides a holistic understanding of the virtual community and insight into the use of informal power in the Twitter community.

The second paper is entitled Pursuit of Operational Excellence: A Systemic Approach coauthored by Christine Welch, Tammi Sinha, and Nigel Ward. Operational Excellence, is generally agreed to be present when high performance teams are seeking for Continuous Improvement in well-designed processes, using appropriate tools and technologies. But the achievement of excellence depends upon the promotion of an organizational culture in which problem-solving, team-working and effective leadership combine to focus upon customer needs, it is dependent upon readiness to innovate and where all employees who are empowered to act to maintain optimal flows of value. Operational Excellence is based upon self-healing flows but it must be recognized that organizational processes are not static because organizational change is endemic and continual. The environment within which an organization subsists is constantly changing which highlights the systemic nature of business processes, their interactions with one another and with external stakeholders such as customers and suppliers. Continuous improvement requires that creative thinking, and tools and techniques to support creativity, are always available. The paper was the outcome from a a Community of Practice workshop with the theme of Operational Excellence. In this paper, the elements of this model are set out, showing how they can contribute to OE.

The third paper is entitled A Managerial and Linguistic Perspective on Researching Manager Behaviour Aimed at Replacing Human Managers with Robots and is co-authored by Justyna Alnajjar, and Olaf Flak. In this paper the authors deal with an important aspect of modern life and one that may have far reaching ramifications. They write about the way in which machines and robots are supporting and, in some cases, replacing human activities, such as replacing team managers with robots. Other examples have emerged within the organisational environment such as the stock exchange and market analysis. Despite current practice to track the activities of internet users and online applications there appears to be a dearth of research using online management tools in order to obtain data about managers’ behaviour. In their paper they provide examples of the observation of managers’ behaviour using selected online management tools. They then analyse the date using the tenets of anthropocentric linguistics and the so-called CCC (correspondence, consistency, and correctness) model.  The authors state that the aims of the paper are to:

These are followed by an account of the first UKSS Systems forum that took place in Bristol [England] in March 2016. The day began with a general discussion about the way in which the UKSS was developing and the purpose of the day. Ian Roderick and Frank Stowell outlined the general intention behind the notion of Forums[1] . These will be offered as a means of creating a space for connecting policy and decision makers with the ideas and processes of system thinking. The question dealt with in the first forum was:

‘What value have systems ideas in making sense of the complexity of issues like migration?’

[1] Fora is sometimes cited as the correct plural for forum. Although it is correct, it is debatable if it is the only correct pluralisation. Most online dictionaries provide both fora and forums as acceptable terms. 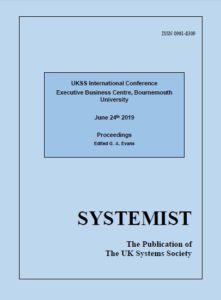